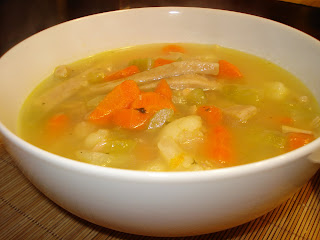 I'm not a big fan of ham. Holidays like Christmas often have ham served as the main meat. I try to convince my mom that this isn't that big of a deal to me because I'm really just happy eating side dishes. But each year she wracks her brain trying to come up with an alternative to ham. Last year we had a beef roast, this year we had turkey. And by turkey, I mean my mom had made a TON of turkey. So needless to say, I was sent home with a large container of prepared turkey.

I wasn't quite sure what to make out of the turkey. In fact, it sat in my freezer for a week before I decided it's fate. Turkey Noodle Soup.

What would you have made out of leftover cooked turkey?

I looked for a recipe that had homemade noodles and found this delicious looking recipe for Chicken Noodle Soup on For the Love of Cooking. I figured I could easily just swap out the chicken for turkey. As prepared in the original recipe, each serving provides:

278 calories
3.8 g fat
39.2 g carbohydrate
2.5 g fiber
21.2 g protein
Other than swapping out the chicken for turkey, I made a few other changes. I increased the amounts of onion, celery and carrots, as well as added an extra cup of frozen stir fry veggies. I also made the full recipe for the noodles (with half the flour being whole wheat) but only put half in the recipe. After allowing the other half of the noodles to dry out for an hour or two on the counter, I put them in a ziplock bag in the freezer for soup for another day. It ended up being delicious! It was perfect for a cold, snowy Michigan weekend and even better reheated for lunch the next day.
Turkey Noodle Soup - BETTER

Saute onions in olive oil until soft, about 3-4 minutes. Add garlic & cook for 30 seconds. Add broth and the remainder of the ingredients. Cook over medium low heat for 1-2 hours. Meanwhile, prepare noodles.

In a mixing bowl, combine flour, salt, egg and milk. Mix until you produce a slightly sticky ball of dough. Flour the counter and roll out dough to 1/8 inch thickness. They plump when cooked so make sure you roll them out thin. Cut noodles using a pizza cutter. Cut them smaller than you imagine because they will grow in the broth! Let the noodles dry out on the counter for at least 1 hour before adding them to the soup. After 1 hour, take half of the noodles and put in a ziplock bag in the freezer for another time.