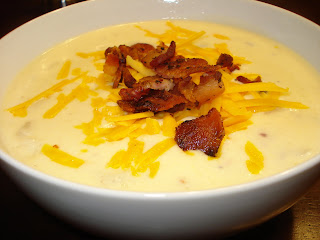 After having a bunch of athletes over for a potato and chili bar, I was left with a bunch of leftover baked potatoes. I decided to find a recipe that used already baked potatoes and came up with a couple of options. Many hashbrown recipes called for chilled baked potatoes, but Paul isn't that big of a fan of hashbrowns... and I am. So that's a bad combination. I found some recipes for baked potato soup - WINNER. As expected, it's freezing here in Michigan so soup is always a good winter choice. I had most of the ingredients on hand (no scallions - ugh!) so into the menu plan it went.

I decided to branch off from my usual list of food blogs and find a recipe using google. I came across the site Crash Test Mommy who posts all kinds of topics, not just recipes. But her recipe for Baked Potato Soup looked DELICIOUS! So that was the winner.

As posted in the original recipe, each serving provides:
768 calories
52 g fat
52.4 g carbohydrate
2.6 g fiber
24.3 g protein
I made a bunch of changes to the original recipe. I'm sure my changes decreased the richness of the recipe but it still tasted great, in my opinion. First, I decreased the roux by only using 2 Tbsp butter and 2 Tbsp flour. I also used skim milk, 2% cheese and reduced fat sour cream. It still thickened up nicely. Finally, I only used 6 strips of bacon instead of 12. It still gave it the salty smoked flavor, just not quite as much fat. I imagine you could also substitute turkey bacon.

Additionally, the recipe states it makes 6 servings. I would imagine that you could get more like 8-10 servings out of this recipe which would also decrease the nutrition stats. I kept it at 6, however, just to be consistent.

Bake potatoes and let cool. Once cooled, cut each lengthwise and scoop out pulp. Cook bacon (I like to use the microwave and paper towels to get out a lot of the grease) until crispy, crumble into pieces. Set potato pulp and bacon aside. Chop green onions.

Increase heat to medium and gradually add milk. Continue stirring until thick and bubbly. Stir in potato pulp, salt and pepper. Add 2 Tbsp of the green onions, 1/2 cup of the bacon and 1 cup of the shredded cheese. Set aside the remainder for garnish.

Stir in sour cream and cook until thoroughly heated, stirring frequently. Serve in bowls and garnish with remaining bacon, onion and cheese.