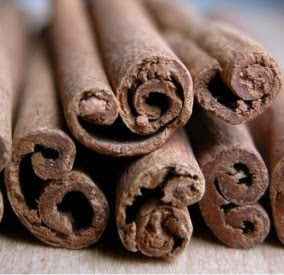 Have you ever heard of superfoods? Superfoods is a term coined to describe foods that have significant nutritional benefits beyond their macronutrients. They might pack an extra punch of vitamins and minerals or have an abundance of phytonutrients (or essentially chemicals within foods which promote health). For the next several weeks I plan to provide you with examples of superfoods each Thoughtful Thursday and give you ideas of ways to incorporate this superfood in your diet.

Cinnamon has been labeled as "the humble superfood". I think they mean that its not some fancy, exotic fruit or some crazy berry that you have to buy in health food stores. But rather, cinnamon is a simple spice that you can get in the aisles of any grocery store. You can add it to a number of foods quite easily. AND It has tons of health benefits.

The USDA found that simply incorporating a 1/2 tsp of cinnamon into your diet each day can help control type II diabetes as well as lower LDL (or bad) cholesterol.

The smell of cinnamon itself has shown to provide a "brain boost" through increased blood flow to the brain. So it might be good in situations where you need to study or have improved memory.

The best part about cinnamon as a superfood is that it is super easy to incorporate it in your diet.

Add it to breads, oatmeal, yogurt, cereal. Try cinnamon instead of salt in some richer sauce dishes or with dark leafy greens.

One tip - don't try to increase your cinnamon by doing a cinnamon challenge... RIDICULOUS :)

How can YOU incorporate CINNAMON into your daily diet?
Posted by Jody @ Raising Fin and Fish at 12:01 PM