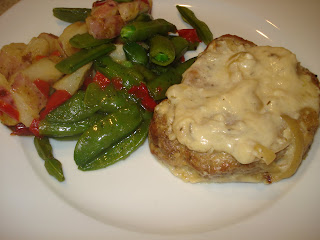 Apparently its slow cooker week here on Great Blog Food, Made Better as I am on day number 3 of posting slow cooker recipes. I love using my crock pot(s). It is so much easier to throw the ingredients in then go about my day.

One thing that I had never made in a crock pot before was pork chops. My mom always made pork chops with Shake-n-Bake coating and I loved them as a kid. So the few times that I have made them in my adult life, I have used some sort of coating. I know that many people use the crock pot to cook pork chops so off I went in search of a recipe that fit the bill.

I think that sometimes pork gets a bad rap from it's fattier counterparts like bacon. But a lean pork tenderloin that has been sliced in to chops with all visible fat trimmed is a leaner protein option. My local grocery store often has pork tenderloins on sale and I just take the whole loin up to the meat counter and ask them to slice it for me... way cheaper than buying pre-sliced pork chops.

For this recipe I only made a couple changes. I used 3 oz pork chops instead of 4 oz pork chops. I also found that I didn't need nearly as much of the sour cream sauce as the recipe calls for so I cut the ingredients for the sauce in half. I also used reduced fat sour cream instead of the full fat version. It was delicious! Very tender and fell apart with my fork. It was a great change of pace from our usual chicken.

Season pork chops with salt, pepper and garlic powder and then dredge in the 1/2 cup flour. In a skillet over medium heat, spray skillet with nonstick spray and then brown the chops on both sides.

Place the browned chops in the slow cooker and top with onion slices. Dissolve bouillon in boiling water and pour over chops. Cover and cook on low 7 to 8 hours.

After the chops have cooked, transfer the chops to the oven to keep warm. In a small bowl, blend 1 Tbsp flour with the sour cream; mix into meat juices. Turn slow cooker to high for 15 to 30 minutes, or until sauce is slightly thickened. Serve sauce over pork chops.