On New Years Eve this year (I know it was a few months ago!) our friends gathered to ring in the new year. A few minutes before midnight, one of my friends asked the others what their new year's resolutions are.

I resolved to lose the baby weight (boring....)

One friend resolved that she was bringing sexy back. She had a child in the previous year and was now a stay at home mom. She found herself all too often staying in sweats and a ponytail and resolved to put a little more effort into her appearance. I thought this was a great idea.

My friend, Julie, resolved that she and her husband were going to eat intentionally. She elaborated that they were trying to be more aware of where their food came from, what was in it and how they could get better control of their food. We have talked about splitting up a cow for beef so we know where our meat comes from. I know she rocks the bread machine for homemade bread. She also told me that they had made some homemade broth and it pretty much made everything they used it in awesome.

Julie's resolution got me thinking about all the processed foods in my life. Although I'm not willing to give it all up (and I don't think she is either...) I could make some changes in the foods that I am able to make my own. For this reason I thought I'd give homemade broth a try.

I purchased a small little roaster chicken and prepared it based off of the Pioneer Woman's recipe. After serving the chicken, I saved the carcass and remaining meat that was on it for some broth. (recipe below, adapted from here).

When all was said and done, I made 8 cups of super flavorful broth! I packaged them up into 2 cup servings (about the size of a can) and laid them flat in the freezer for future use. 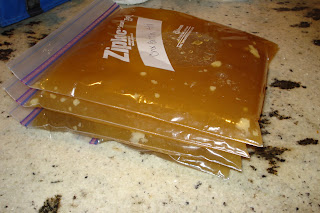 A typical one cup serving of chicken broth has 754 mg of sodium. That's a quarter of your daily value in just one cup of broth!!! I'm not quite sure how to calculate out the nutrition facts on this but my best guess is that the homemade version has less than 100 mg of sodium per serving. YET has more flavor from all the other goodies.

***My roaster chicken still had a bunch of meat on it as well as remaining skin which had a lot of seasoning on from the original cooking process. For this reason, I didn't add a ton of seasoning. You be the judge of what you need.
Put chicken carcass into large crockpot. Add chopped vegetables and seasoning. Add water. Cook on low for 8-10 hours.

Place a wire strainer over a large tupperware container. Ladle contents of slowcooker into tupperware, allowing the strainer to catch all the solids. Cover tupperware and refrigerate overnight. 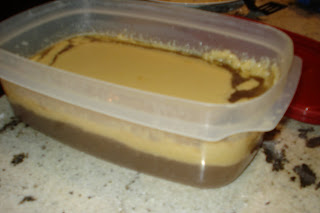 The next day, the fat will have risen to the top and solidified. (its ok to gag a little). Scrape the fat layer off the top. Portion out remaining broth into desired servings and freeze until ready to use.

***Original recipe makes a blenderized version utilizing all the scraps in the slow cooker, except the bones. I chose to make more of a clarified version.
Posted by Jody @ Raising Fin and Fish at 9:11 AM