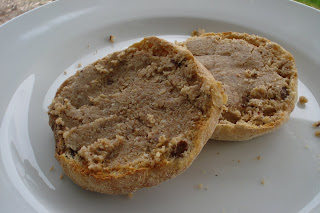 Almond butter on a cinnamon raisin English muffin - Yum!
I don't have a Costco membership but I lust after my mom's membership. There is a Costco in our town but its about 25 miles from where I live and I just don't think its worth it for the drive. BUT I do, however, make my mom buy me stuff when I know she's going to come out and visit me. This scenario resulted in me scoring a giant 3 pound bag of almonds. AWESOME.

So I've been looking at my giant almond bag and trying to come up with awesome recipes to try. I figured, why not try to make homemade almond butter?

I found a recipe for almond butter that I read the reviews and definitely tweaked it a little bit. First of all, I added honey to it for sweetness and to make it blend "better". Secondly, when I toasted the almonds I added a couple tablespoons of flaxseed to the pan. I figured if I'm already getting healthy fats from the almonds and olive oil, why not make it a triple threat and add flax seed?

Preheat oven to 300 degrees. Spread almonds and flaxseeds on a single layer in the bottom of a pan. Roast for 20 minutes.

Put almonds and flaxseeds in a food processor. Begin to process while drizzling in olive oil and honey until creamy texture is reached. Store in an airtight container in the refrigerator.