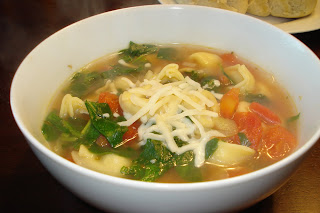 Often times we get so focused on particular qualities of healthy eating that we neglect to see the importance of other aspects of a healthy diet. In the past I have found myself so focused on cutting the fat or adding in fiber that I neglect to think about other qualities of food like calcium content or other vitamins and minerals.

One mineral that should be focused on is sodium. (Did you know that sodium was a mineral?) Sodium, when eaten in excess, can impact cardiovascular disease, blood pressure and lead to water retension. Recommended intakes of sodium range from 1500-2400 mg per day but reports indicate that the average American can take in as much as 8000+ mg each day!

Many sources of sodium are fast foods and restaurant foods, so if you're making food homemade you're already ahead of the game! But other area that a lot of sodium can come from are canned goods like canned vegetables and soups.

I simply used low sodium chicken broth and canned tomatoes that had no added salt. I did not add salt to the pot and cut the sodium down by over 500 mg to 911 mg per serving.

Overall it was pretty awesome! I thought it was tasty and flavorful. I was bringing a meal to a family in our church so I made a big batch of the soup base and split it in two before adding the tortellini. I put the soup base in a ziploc and then gave the spinach and tortellini on the side before giving it to them.

In a large pot, heat oil over medium heat. Add onion and cook until beginning to get translucent. Add garlic until softened and light golden. Add oregano, broth, tomatoes, and pepper to taste.

Bring soup to a boil and add tortellini. Cook according to time listed on package (mine was 2 minutes). One minute before tortellini are done, add spinach. Stir to combine.

When tortellini are cooked, remove the pot from the heat immediately so your tortellini do not overcook. Add additional pepper if necessary. Serve soup immediately.