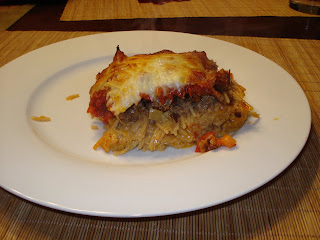 Pasta is often my go-to dinner when short on time or I don't have anything planned for dinner. I always have an abundance of pasta, sauces (gasp! I RARELY make homemade) and protein to add on hand, so its something I can quickly throw together. For my real job, I came across this recipe on The Pioneer Woman's recipe site Tasty Kitchen. Sounded like a good variation of my traditional pasta dishes, so I gave it a try!

As listed, each serving (6) of this recipe provides:
607 calories
38.9 g fat
38.1 g carbohydrate
3.2 g fiber
24.8 g protein
Like usual, I was making this the night before. I put half of the recipe in a 9x5 loaf pan for the next night and kept it in the fridge. I put the other half in a foil lined 9x5 loaf pan for a freezer meal. Afterall, there's only two of us eating real food in the house and I figured that it would be enough for the husband and myself, plus leftovers for lunch the next day. 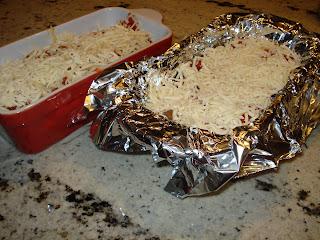 I made quite a few changes to the recipe but I think I still got the same tasty outcome:

I know that sounds like a whole lot of change, but really, it was what we already had in our house - so it was no big deal. I also omitted mushrooms because I'm pretty sure my husband might die if a mushroom crossed his lips, or so he makes me believe.

When all was said and done, this was delicious! The sausage gave the dish a really powerful flavor. I'm sure I could have decreased the fat even more if I had used turkey sausage, but that's not always so easy to find. The peppers also added a lot of flavor. I'm looking forward for when I pull the other half out of the freezer!
Super Easy Spaghetti Pie - BETTER

Saute Italian sausage in a large pan. After about 5 minutes, move sausage to the side. Cook the chopped onion, peppers and mushroom in the same pan. Saute until veggies are soft. Remove the sausage and set aside.

Take pan off of the heat and add about a 1/2 cup of reduced fat sour cream and stir into the veggies.

To assemble the pie - pour the creamy vegetable mix onto the spaghetti "crust". Next cut up the sausage and place a layer of pieces on the vegetables. Cover it all with a layer of spaghetti sauce and then a layer of shredded mozzarella.
Bake at 350 degrees for 30 minutes.