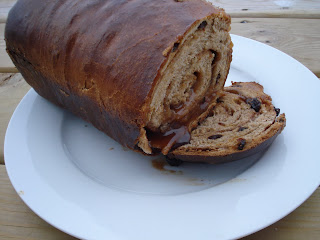 Apparently everyone knows that if you are trying to take good food pictures you just cart your dish out onto your back porch and take a picture. Well, I actually tried that and - what do you know? - this is by far the best food picture I've taken so far. Too bad that it's winter and when I'm usually making dinner it's pitch black outside so I can't guarantee good pictures every time, just when I cook in the daylight :)

My husband loves cinnamon raisin bread. He honestly got a little giddy when I told him I made a loaf of it this day. When I saw the recipe from Annie's Eats for Cinnamon Raisin Swirl Bread, I knew I would get this reaction from him.

As originally posted, each slice (1/16 of the loaf) provides:
200 calories
4.3 g fat
36.8 g carbohydrate
1.2 g fiber
4.1 g protein
As I've said before, baking with yeast requires precise chemical reactions. So I am often afraid to make HUGE changes to a recipe which includes yeast. So I just made sure I used skim milk and I substituted 2 cups of the flour for wheat flour. Did it taste awesome? YES .... Did it make a huge difference? Not so much but at least you save 10 calories, 0.3 g fat and gain 1.4 grams of fiber per slice.... ehhh, I tried.

In the bowl of a standard mixer, combine the yeast, warm milk, both flours, butter, sugar, egg, salt and cinnamon. Mix briefly until a dough forms. Switch to the dough hook and knead on low speed until the dough is mostly smooth and clears the sides of the bowl, about 3 minutes. Add in the raisins and allow to continue kneading about 3 minutes more, until the dough is smooth and supple and the raisins are evenly incorporated.

Transfer the dough to a lightly oiled bowl; turning once to coat. Cover the bowl with plastic wrap or a clean kitchen towel and let rise in warm place until doubled in bulk, about 1 hour.

Turn the dough out onto a lightly floured work surface. Pat into a round circle. Fold the bottom third of the dough up and fold the top third down, in business-letter fashion. Then fold the right and left sides into the center in thirds, forming a rectangle. Press down to seal. Return to the bowl, cover and let rise again until doubled, about 40 minutes. (See Annie's Eats for a GREAT picture guide to this step).

Generously butter a 9x5" loaf pan. To make the filling, combine the sugar, cinnamon and water in a small bowl and whisk until well combined. Return the dough to a lightly floured work surface. Roll the dough into a 10x12" rectangle. Brush lightly with the some of the beaten egg. Sprinkle with the cinnamon sugar mixture, leaving a thin border around the edges. Fold in the edges of the long sides of the dough about 1 inch. Beginning with the short ends, roll the dough up into a tight spiral log, gently pressing as you go.

Pinch the seam shut and place the loaf, seam side down, in the prepared baking pan. Cover loosely with plastic wrap or a clean towel and let rise until dough rises just above the edges of the pan, about 30 minutes.

Meanwhile, preheat the oven to 425 degrees. When the loaf has risen, brush the top of the loaf lightly with the remaining beaten egg. Bake, rotating the pan halfway through, until the loaf is golden brown, about 45 minutes. If the surface seems to be browning too quickly, tent loosely with foil (I did this about 15 minutes into baking). Cool in the pan 5 minutes, then turn the loaf out and transfer to a wire rack to cool completely before slicing.