When you see a recipe featured and linked between several sites, you assume it’s a good one. When that recipe contains the word “hoagie” that perks the ear of this former Philadelphia-area resident. Although, really, this recipe reminds me NOTHING of the ham, salami, capricola, chewy bunned sandwiches of my childhood – yet still tasty.

As prepared, the “Hot Hoagie” featured on My Kitchen Café and later by Real Mom Kitchen, the recipe is not exactly figure friendly. Here’s the lowdown:

That’s even using reduced fat mayo and sour cream!! I made a few changes and still came up with a tasty dinner. 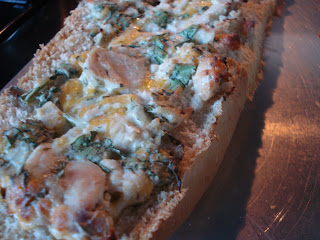 Hot Hoagies – BETTER for you

Preheat oven to 350 degrees. Place hollowed out French bread on a large baking sheet. Mix all topping ingredients together in a bowl. Spread topping evenly on top of both lengths of French bread. Bake for 15-20 minutes until bubbly and edges are lightly browned. Slice into pieces and serve immediately. 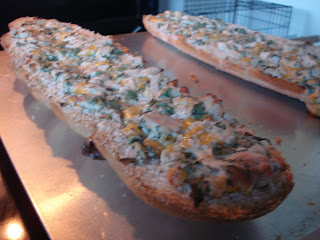