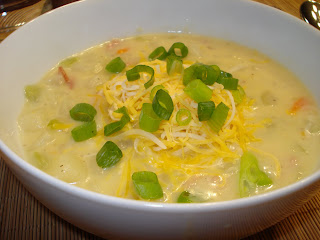 As the leaves begin to change and the temperatures fall, it starts to feel like soup season to me. I had an extra large bag of potatoes that I wanted to find a use for and craved something warm. So I searched for the perfect potato soup recipe. The Girl Who Ate Everything posted a delicious looking Creamy Ham and Potato Soup a few weeks ago and I thought I would give it a try. As originally posted, this soup provides:

When people think of making healthy changes, they often limit their scope of “healthy” to calories, fat grams or carbohydrates. But healthy changes can come in a variety of forms. Soups especially tend to be very high in sodium. The average American only needs 2,400 mg of sodium each day but many Americans consume 8,000-10,000 mg or more each day. Eating too much sodium (or salt) can contribute to elevated blood pressure, cardiovascular disease and just plain old fluid retention.

In this recipe, I changed the chicken broth to low sodium chicken broth, omitted the ½ tsp salt and switched out the diced ham for Boar’s Head brand reduced sodium ham. With those changes, I was able to cut the sodium nearly in half. I also only used 2 Tbsp of butter and 2 Tbsp of flour to make the roux and it was perfectly thick enough.

1 tsp ground white or black pepper, or to taste

Combine the potatoes, celery, onion, carrot, ham and chicken broth in a stockpot. Bring to a boil, then cook over medium heat until potatoes are tender, about 10 to 15 minutes. Stir in the salt and pepper.

Stir the milk mixture into the stockpot and cook soup until heated through.

(Reheats well for lunch the next day, too!)