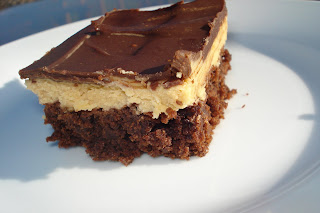 Husband: "Those are definitely not making the blog."

Me: "Ehhh, I'll probably still put them in because they are darn tasty, even if they aren't healthy!"

So as I state in the description, not everything on this blog is a healthy option. I made these brownies to take to a friend's house for a cook out and HAD to take the leftovers to work otherwise I would have eaten the entire pan in two days. They were awesome.

I have seen the recipe on two different sites, both The Girl Who Ate Everything and Real Mom Kitchen. In the peanut butter filling, I used 3/4 cup peanut butter and 1/4 cup butter instead of 1/2 cup of each. I figured this decreased the saturated fat a little and increased the heart healthy fat a little (although likely had about the same amount of calories and total fat).

Although I didn't make any of these changes, here are some other ways you could health-up this recipe a bit:
Good luck!!!

Prepare brownie batter according to package directions. Spread in the bottom of prepared pan. Bake 28 to 30 minutes. Cool completely, at least 1 hour.

In a medium bowl, beat filling ingredients with electric mixer on medium speed until smooth. Spread filling evenly over brownie base.

In a small microwavable bowl, microwave topping ingredients uncovered on high 30 to 60 seconds; stir until smooth. Cool 10 minutes; spread over filling. Refrigerate about 30 minutes or until set. Cut into small brownies and store in the refrigerator.