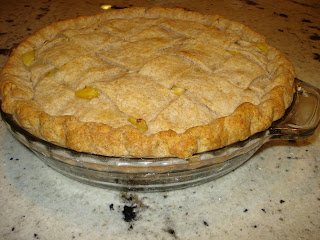 Confession: I’m a dietitian and I LOVE pie crust. I know I could have made this (or any pie recipe) healthier by only doing a top crust and forgoing the bottom crust, but I refuse.

With that being said, YOU (as it is not an option for me) could save 161 calories, 10 grams of fat and almost 15 grams of carbohydrate by simply making it with a top crust only. That is… if crust isn’t your thing.

I am on a comfort food kick and definitely put chicken pot pie in that category. So in search of a chicken pot pie recipe, I came across this recipe from Our Best Bites. It’s the perfect traditional chicken pot pie – no frills or crazy ingredients – just what you imagine your grandma making. As printed in the original recipe (and with a DOUBLE crust), 1/8th of this pie provides:

I didn’t make huge changes to this recipe. I used 3 potatoes, instead of 5 potatoes and omitted the butter. I also used 98% fat free cream of chicken soup instead of the full fat version. I also tried replacing one cup of white flour with one cup of wheat flour in the pie crust recipe. To be honest, this small change didn’t make that much of a difference in nutritional value, however I was more curious to see if I could still get a flaky crust with whole wheat flour in the recipe. It turned out pretty good! Especially for a savory recipe like this one. 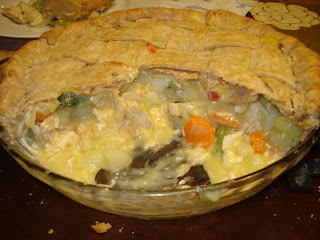 Combine flours and salt in a medium sized bowl. Cut in shortening with a pastry blender or two knives until you get about pea sized pieces.

Sprinkle ice water in about a tablespoon at a time. Very gently, turn the dough with your fingers so it gets exposed to the water. Gradually, all of the flour mixture will be moistened. Divide the dough into two balls. Wrap in plastic wrap and keep in the refrigerator until ready to use.

When ready, roll out one ball on a lightly floured surface until it is big enough to fit in your pie pan. When ready for the top, roll out the second ball and place it on top of your filling as desired. For a good picture demonstration of crusts, check out the original recipe here.

Preheat oven to 400 degrees. Bring a large pot of water to a boil. When ready, add potatoes and boil until tender.

Add the filling to prepared pie crust. Top as desired with second crust. (Or save yourself some fat and calories by omitting the bottom crust!) Make sure you cut vents into the top of the crust to let out the steam.

Place the pie on a baking sheet and bake for 40-45 minutes or until the crust is golden brown. Remove from oven and allow to stand for a few minutes before serving.

***This recipe could also be made ahead or doubled and put in the freezer for up to 3 months. Put the UNBAKED pie in the freezer, covered in foil. When desired, pull the pie out of the freezer 24 hours in advance and put in your refrigerator. You may have to increase the cooking time by 15 minutes or so.